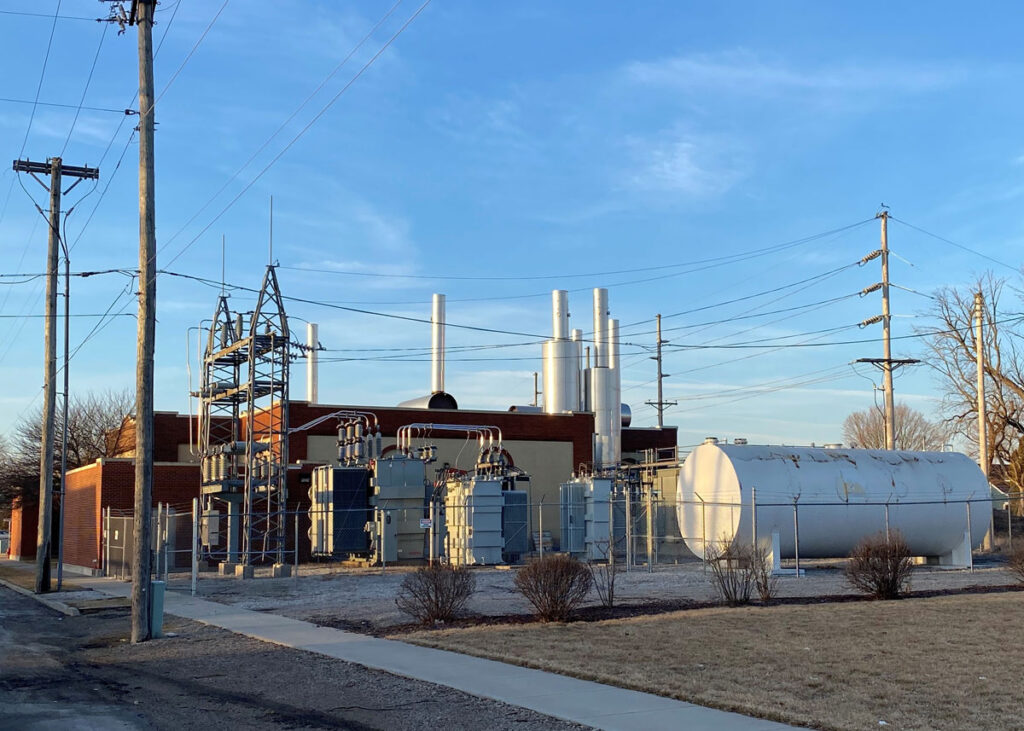 With 6 generators currently available, we have the capacity to generate enough power to pull the normal load for the community.

In 1976, after fuel prices soared during the energy crisis, SCMEU was given the opportunity to purchase the needed electricity at a lower cost than producing it.

The power plant now operates in times of emergencies and during peak-demand times.

The Story City Municipal Electric Utility was established in 1904 when the city leased and operated the power plant located at the southeast corner of Broad and Hillcrest. (The names of the original owners are unknown) This plan consisted of one 100 horsepower steam engine operating a 75 Kw generator.

By 1917 it was apparent that the needs of the customers were going to continue to increase, and the plant would again need to be expanded. The problem was that the site was too small to allow this, so the council began looking for a new location.

The new building was constructed in 1919. The location was ideal as it allowed delivery of coal via the railroad and the lot was large enough to accommodate future expansions. The largest generator was moved from the old plant to the new. The city then installed a 360-horsepower, 240Kw generator. This would be the last steam powered engine that was purchased.

In 1948 the City Council found itself unable to efficiently manage both the power plant and the growing needs of the city. The People voted overwhelmingly in favor of appointing a Board of Trustees to manage the power plant.

On June 1, 1948, the City Council passed ordinance #233 creating the Board of Trustees. Appointed to the original board were Russel Leonard, Carl Baldus, and Elmer Jensen.

With their knowledge, foresight and dedication, these men spent many long hours establishing the policies and regulations that still govern the operation of this utility today. As one of the trustees was quoted as saying, “We must review the past, examine the present, and prepare for the future”. All Board members, past and present, have made their decisions based on this same belief.

The Power Plant ran 24 hours a day, 7 days a week and with this came the realization that if a disaster, like a tornado,(or Derecho 2020) would destroy the plant, or if two or more engines became disabled at the same time, we would not be able to meet the needs of the community. Because a second source of power was desired, negotiations with Iowa Electric Light and Power (now RPGI) were started. This lead to construction of a substation to tie into the I.E. transmission line south of town. In August, 1959, the sub was activated and we were then able to purchase our electricity from I.E.

As the years passed, and fuel prices increased, the cost to generate ourselves, or buy wholesale were basically equal. Somewhere between 1970 and 1972 the plant stopped generating during the night hours. Suddenly in 1976, due to the energy shortage that rocked the country, fuel prices increased dramatically. As a result, we found it was considerably cheaper to purchase from I.E. The plant was then shut down and put on standby with the option to still run in the event of an emergency.

As of 2022, we are still part of the Resale Power Group of Iowa Power Grid. This grid serves cities across the entire state. If they need additional generation to meet the needs of their customers, they will call on us to carry the load that is on our system, plus any extra capacity can be sent out to the grid their systems, reducing the load on their generators. Therefore, in times of extreme heat, or extreme cold, you can drive by the Plant and see our engines running.